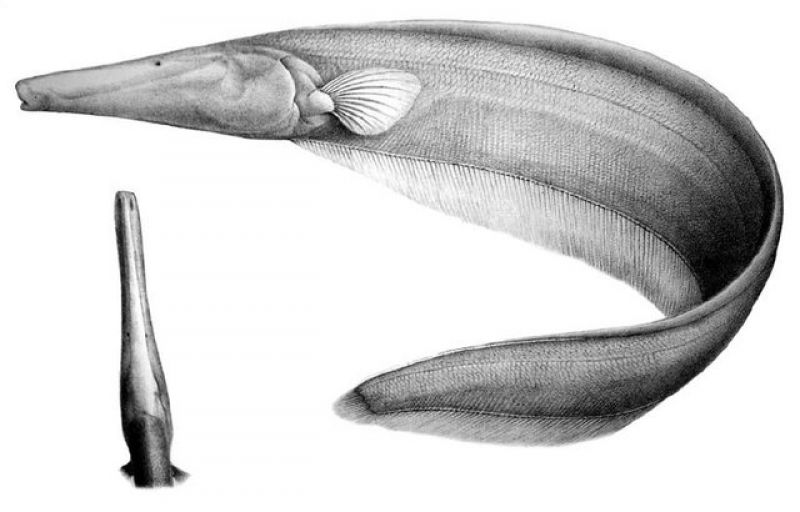 Despite being known for over 120 years the genus is still monotypic, which suggests a long period of evolutionary history since the last common ancestor within the Apteronotidae.  According to Campos-da-Paz (1995) the monotypic genus Orthosternarchus is in the subfamily Sternarchohampinae and is sister to Sternarchorhampus but that this relationship is not yet fully known. Albert (2001) found that Sternarchohamphus muelleri is most closely related to O. tamandua of the species he studied.

Hilton et al. (2007) had access to a relativley large number of specimens of this species and their observation of the eyes was that: "The position of the eye is asymmetrical in O. tamandua (Fig. 7; also see Fig. 2). Except for the eye diameter measurements, all other nine eye-related measurements were found to be asymmetric, with their frequency distributions not deviating significantly from normal in the Kolmogorov-Smirnov tests (p >0.2 in all cases). To graphically view this, we
plotted the asymmetry of eye to pectoral fin against TL (Fig. 8). Although pronounced, the fluctuating asymmetry is not correlated with size, sex, or environment (e.g., being from black vs. white waters). The eye of O. tamandua is reduced in its overall size and anatomy (e.g., absence of extrinsic eye musculature; Albert, 2001), and this reduction may be correlated with the observed fluctuating asymmetry."