Nothing known. The fish was collected from water brought up from a depth of 30m during a well‑drilling operation.

In a large study of the Family Characidae, based solely on morphological characters, Mirande (2010) was unable to draw any meaningful conclusions regarding the phylogeny of this species: "The position of this genus within Characidae is completely enigmatic; even its assignment to the Characidae can not be considered to be well justified. The single species of this genus, Stygichthys typhlops Brittan and Böhlke, has hypogean habits and some unique or much unusual features among the Characidae (Géry 1977). The presence in this species of a very short anal fin with only eight rays is unique within the Characidae. No information relevant to a hypothesis about the relationships of this genus is available and Stygichthys is maintained as incertae sedis within the Characidae."

In a study based on morphological and molecular data (Mirande 2018) the monotypic genus Stygichthys was placed in the Tribe Grundulini within the subfamily Stethaprioninae. Significantly, the four species shown to be sister species by Oliveira et al.2011 (see above and Figure) are also found close to Stygichthys within this tribe and it may be that we can now begin to explore the evolution of Stygichthys from its epigean ancestor.

“Stygichthys typhlops is endemic to Brazil, found only in the water table in the drainage of the Dark Stream, a tributary of the Verde Grande river, upper São Francisco. Considering the extension of the stream, about 15km, it is estimated that the area of occupation is 15km2. This water table has been heavily downgraded by the extraction of water for banana cultivation on a large scale, which, in addition to decreasing the habitat available to the species, can also affect the food supply. As this threat affects the entire aquifer, it was considered only one location. A hydrological study is urgently needed in order to predict the maximum amount of water that can be removed from the sheet. The species was classified as EN B2ab (ii, iii).” 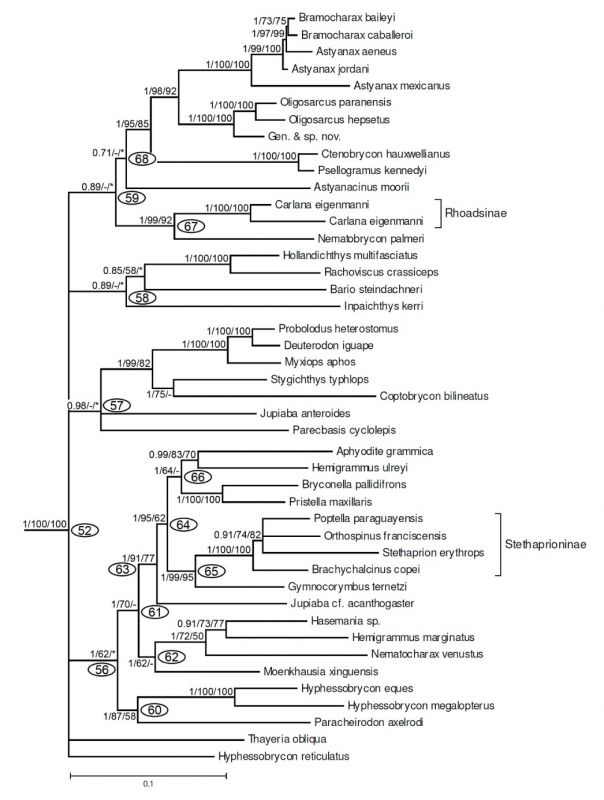 Maximum likelyhood tree for part of the Family Characidae showing the relationships of Stygichthys typhops (Figure 10 in Oliveira et al. 2011)