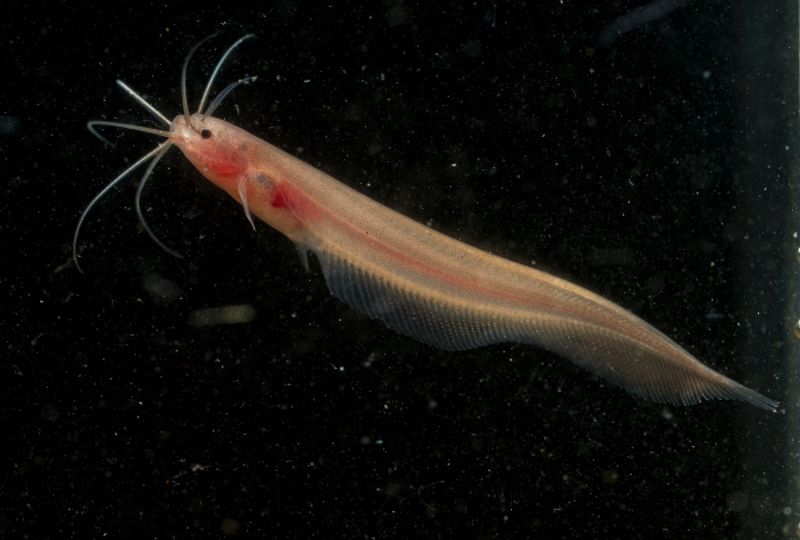 Type locality: a water well at Aloor Village, Thrissur District, Kerala, India, depth of well 5.5 meters. 10°20.30'N, 76°18.37'E. Also known from: a well at Nellayi (Vylore) Village, Kerala, India (10o39’N, 76o27’E), which is 4km north of the type locality (Lundberg, Luckenbill, Subhash Babu and Ng 2014). A further site is at Perambra, Thrissur District (10o34’N, 76o30E), 2km from the type localilty. At the latter site many fish were observed in surface water channels having probably been washed out of the shallow laterite groundwater tunnels it normally inhabits (Binoy, Roshan and Rakesh 2012). The location of the single specimen used by Britz, Kakkassery and Raghavan (2014) was obtained from a public well near the town of Thrissur. The type locality of the clariid fish Horaglanis alikunhii is only 13km from the site described in Binoy, Roshan and Rakesh (2012).

The area in which this species (and also Horaglanis and Monopterus) is found is predominantly in laterite.

Britz, Kakkassery and Raghavan (2014) used traditional clearing and staining techniques on one individual to reveal the osteological detail. In an almost parallel study Lundberg, Luckenbill, Subhash Babu and Ng (2014) used high-resolution x-ray CT scanning (HRXCT) to examine the osteology of three specimens of K. shajii (specimen details given below). Britz et al. (2014) report on the cartilaginous skeleton, which is something Lundberg et al. (2014) were only able to do only within very confined limits and they also missed several structures. Both studies produced anatomically similar results and conclusions that suggested that this species is highly peculiar and unlike other members of the Siluriformes. In general the anatomical complexity is greatly reduced compared to other species. The conclusion of Vincent and Thomas (2011), that they could see no clear relationship with any family of siluriform fishes, was also supported by both studies. Lundberg, Luckenbill, Subhash Babu and Ng (2014:39) concluded that “…we do not find a simple, nested set of unambiguous synapomorphies that precisely resolve the phylogentic position of Kryptoglanis among catfishes.” Britz, Kakkassey and Raghavan (2014:205) resolved the issue: “Our analysis of the skeleton of Kryptoglanis shows that this unusual catfish cannot be assigned to any of the known catfish families. To highlight its highly unique anatomical structure we have decided to place it in its own family … Kryptoglanidae”. [For an interesting review of traditional and modern methods in fish morphological systematics, exemplified by these two studies, see Hilton, Schnell and Konstantinidis (2015)]. We are still no nearer in knowing which group is sister to Kryptoglanis shajii (though there is some similarity to the Siluridae) and it is probable that molecular data will need to be added to the morphological data in order to get closer to a resolution. [See Genetic resources below, but more will be needed than these small fragments of mitochondrial DNA].

The osteology of Kryptoglanis shajii (from Lundberg, Luckenbill, Subhash Babu and Ng 2014)