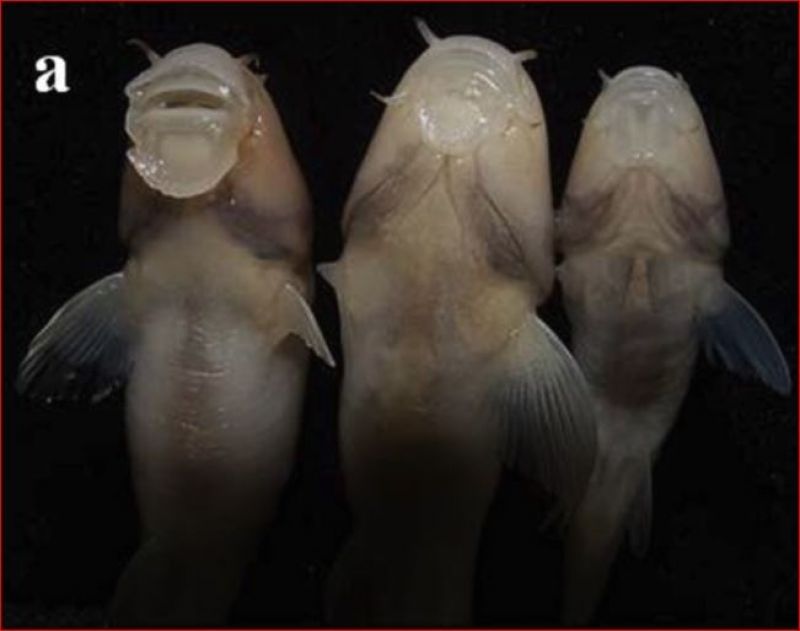 The true habitat of this species is not known. The collection site is the flood overflow for a large resurgence. The resurgence was explored by diving (Farr 1977, 1984:117) but the way on underwater became too narrow at 2m depth. The flood overflow was also dived but without conclusion. Another sump is located in the same area but was not examined (Farr 1977).

It has been known since 2008 (Sargeran et al. 2008) that some of the fishes at the type locailty have a mental disk while others do not (Figure a, below). Hashemzadeh Segherloo et al. (2012) used cytochrome c oxidase I (coI ) sequences for the two morphological forms. They concluded that "Pronounced coI sequence divergence between the two forms of I. typhlops (3·8% K2P distance) was observed. This sequence divergence is higher than the mean intraspecific divergence values reported in other taxa, e.g.0·46% in Lepidoptera, 0·60% in Guyanese bats, 0·27% in North American birds, 0·39% in marine fishes and 0·27% K2P distance in freshwater fishes. The high sequence divergence between the two forms, along with the morphological differences, including the presence of a mental disc, the longer intestine, and either a single chambered or bipartite swimbladder in the specimens with disc, v. the absence of the mental disc, shorter intestine and bipartite swimbladder in the second form, as reported by Sargeran et al. (2008), indicate that the two forms might represent separate species" (Hashemzadeh Segherloo et al. 2012). But they did not go so far as to state that two species were actually present nor to describe the second one. They also showed that the two cave forms are close to Garra rufa.

It was not until 2016 (Mousavi-Sabet and Eagderi 2016) that the second and most recently discovered form (the form with a mental disc) was described as a separate species to Garra typhlops. It was named Garra lorestanensis.

Most recently Hashemzadeh Segherloo et al. (2018), using a mixture of molecular markers, showed that G. typhlops and G. lorestanensis were sister species and that both were sister to the geographically close Garra gymnothorax. The evidence suggets that the two cave species evolved by sympatric speciation. A mitochondria divergence of 3.6% between the two cave species suggest a divergence time of 5-6 million years.

Jalili and Eagderi (2014) examined the osteology of what they called Iranocypris typhlops (now Garra typhlops). However, the three specimens used in their study each had a mental disk so were, in fact, Garra lorestanensis.