As described below, Typhlogobius californiensis lives in a perpetual obligate relationship with a crustacean host with which it shares a burrow for most of its life, and in the wild it appears to be unable to live except in this symbiotic state. In captivity, with good conditions and sufficient food supplied, it can live without the host as shown by MacGinitie (1939). The host is so critical that it is also covered in detail in the following account.

The crustacean host of Typhlogobius californiensis was described as a new species, Callianassa affinis Holmes 1900, to differentiate if from another species, Callianassa californiensis Dana 1854, found in the same area. During research on the genus Callianassa for a Ph.D. thesis Biffar (1972) discovered that Callianassa affinis Holmes 1900 is a junior primary homonym of Callianassa affinis A. Milne Edwards 1860, which is a fossil species from the Lutetian of central France. To solve his immediate problem Biffar (1972) referred to the species as “Callianassa sp. A, new name”. No new name was forthcoming until Holthuis (1991) provided Callianassa biffari Holthuis 1991. In the same year, during the revision of the American Callianassidae, Manning and Felder (1991) errected the genus Neotrypaea to contain four American species (plus four others) which they deemed were not in the genus Callianassa. So the crustacean host is now called Neotrypaea biffari (Holthuis 1991) Manning and Felder 1991. [The citing of revising authors, in this case Manning and Fleder, after the bracketed original author is not common practice in zoological literature but is allowed by Recommendation 51G of the International Code of Zoological Nomencalture].

Over the c.120 years since its description the Crustacean host of Typhlogobius has been known by numerous names. The following list, which does not pretend to be complete, gives some of them.

The relationship between the fish and crustacean host is usually referred to as either a symbiotic relationship or a commensal realtionship (e.g. McCosker 2006), with the following definitions of these terms being:

Commensalism – An organism living in partnership or association with another of a different species without affecting or benefiting it (Chamber Dictionary 2008).

It seems clear that, if we accept that the fish gains shelter while the crustacean is neither advantaged or disadvantages by the presence of two fishes in its burrow, we cannot consider it to be symbiosis. It also seems clear that we could use the term commensalism for this situation.

However, there are other terms available that allow a more refined and precise definition of how the two species involved are interrelating.

Living in the home of, or in close association, of another (Chambers Dictionary 2008), or

The residence of individuals of one species within the nest of another species (Blackwelder and Garoian 1986:469), with the addition of three separate subterms which better define the nature of the association:

Symphile – Welcome guests that make some return to their host

Synechthran – Scavangers or predators tolerated or unsuccessfully challenged in the nest

It is clear that the relationship is not synechthran but it may be either of the other two. Although MacGinitie (1939), the principal authority on these animals, suggests that the fish make no return to the shrimps, he himself gives two examples which are clear, if small scale and possibly insignificant, assistances:

"Though, as has been stated before, the gobies will on occasion attempt to repel the invasion of other burrowing animals which may encroach upon their tunnels, they are not sufficiently aggressive to meet with much success in keeping out other animals. It is their hosts are ever on the alert to repel such invasions." (MacGinitie 1939:492,494).

"The clearing from the burrow of many of the larger particles of food is, so far as I have been able to determine, the only possible benefit that Callianassa may derive from the presence of the blind gobies, that is, the fish by their omnivorous habits clean up most of the material which enters the burrow and is not used as food by the shrimp." (MacGinitie 1939:494).

The latter point is also made by Karplus (2014), a significant authority on symbiotic relationships:

"MacGinitie (1939) often observed C. affinis carrying relative large pieces of organic matter, too large for the shrimp to ingest, and dumping them in front of the fish. The goby which ingested these particles acted as a sanitarian, saving the shrimp the necessity of dumping that material at the burrow entrance. This may be the only activity of the goby that benefits the shrimp, since the fish’s ability to expel intruders is, according to MacGinitie (1939), far below that of the shrimp." (Karplus 2014:312-313).

So the alternative we need to choose between are:

* With return from fish to crustacea the fish is a symphilic inquiline.

If we allow the above examples as assistances, even if of not that much help, then certainly the second of these terms is the better one to use. And it is certainly possible that there are other subtle and/or infrequent acts of return which MacGinitie missed, and since his time no-one else has studied this fish in any detail at all.

Probably now most realistically placed in the Family Oxudercidae (a synonym of this, which will also be used in some sources, is Gobionellidae) (Nelson et al. 2016).

Chakrabarty et al. (2012) show that the nearest relative to T. californiensis (anong the species they tested) is Gillichthys mirabilis. Interestingly both of these species have additional breathing capillaries in the skin and operculum (Zander 2012).

This species lives in burrows created by the Ghost Shrimp Neotrypaea biffari (Holthuis 1991) (Crustacea: Decapoda: Callianassidae) ; see below for a number of other names that have been used in the past). The first person to describe the relationship between Typhlogobius and the Crustacean appears to be Eigenmann (1917:175) where he says: "Under the boulders a crawfish-like crustacean has its burrows, and in these burrows lives a blindfish, Typhlogobius Californiensis." Hubbs (1927:287) says: "[Typhlogobius lives] in a most definite situation: namely, beneath stones, in the thus darkened burrows of a peculiar crustacean." It is not until the major study by MacGinitie (1939:489) that we get any idea what this crustacean is when he says: "This goby has lived so long in a burrow under the rocks with Callianassa aftinis Holmes, a shrimp that, like many other fish living in similar circumstances, it is, in the adult sta!ges, both blind and pink, having lost eyes and pigment." and he goes on to provide a detailed account of the habitat shared by the shrimp and the fish.

It is worth quoting Packard on some aspects of the biology of Typhlogobius:

"In his essay on the Fishes of San Diego, Professor Eigenmann briefly refers to and gives four figures (P1. XXIV) of the embryo of Typhlogobius, Mr C. L. Bragg having been fortunate enough to discover the egg in the summer of 1891. "The eyes develop normally, and those of Fig. 4 differ in no way from the eyes of other fish embryos." In this case, then, we have the simplest and clearest possible proof of the descent of this blind fish from individuals with eyes as perfect as those of its congeners. We have been permitted by the Director of the United States National Museum to reproduce Professor Eigenmanns excellent figures on the embryo, which tell the story of degeneration of the eye from simple disease of the organ, the species being exposed to conditions of life strikingly different from those of its family living in the same bay. Before the discovery of the eggs, the youngest individual ever seen is represented in PI. XXIII, fig. 7, its eyes being though small, yet distinct, and "apparently functional." Packard (1894)

The most critical sources of information on Typhlogobius are as follows:

Eigenmann (1890) - The Point Loma blind fish and its relatives

Ritter (1893) - On the eyes, integumentary sense papillae, and the integument of the San Diego blind fish (Typhlogobius californiensis Steindachner)

Eigenmann (1909) - Cave vertebrates of America, a study in degenerative evolution

MacGinitie (1939) - The natural history of the blind goby, Typhlogobius californiensis Steindachner. THE most important source

Scheich et al. (1972) - Capillary dilatation in response to hypoxia In the brain of a gobiid fish

Congleton (1974) - The respiratory response to asphyxia of Typhlogobius californiensis (Teleostei: Gobiidae) and some related gobies

McNulty (1978) - A light and electron microscopic study of the pineal in the blind goby, Typhlogobius californiensis (Pisces: Gobiidae)

Karplus (2014) - Symbiosis in fishes: The biology of interspecific partnerships 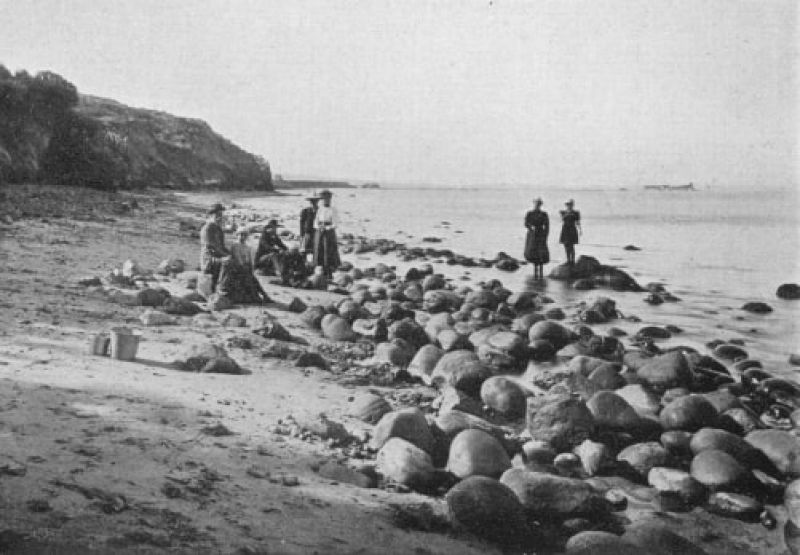 Point Loma, California. Under the rocks are burrows of a shrimp in which live Typhlogobius californiensis (from Eigenmann 1917) 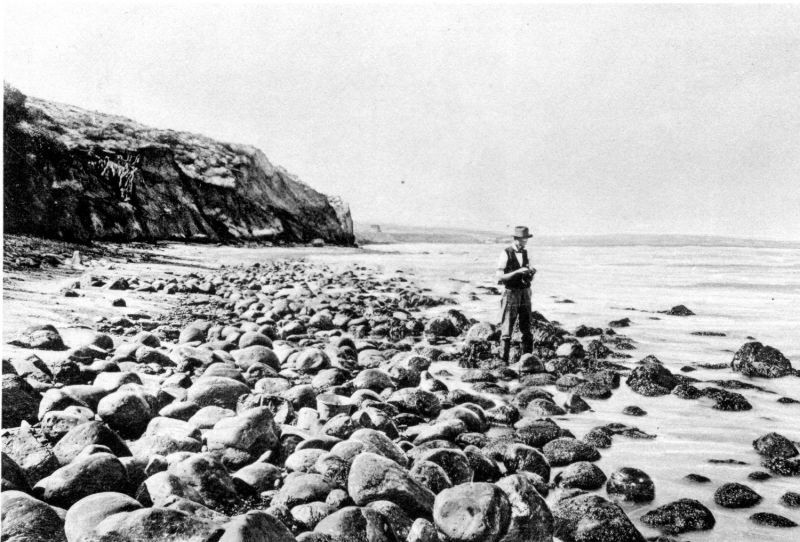 Blind-fish rocks at base of Point Loma, San Diego, California. Photograph from Eigenmann 1909 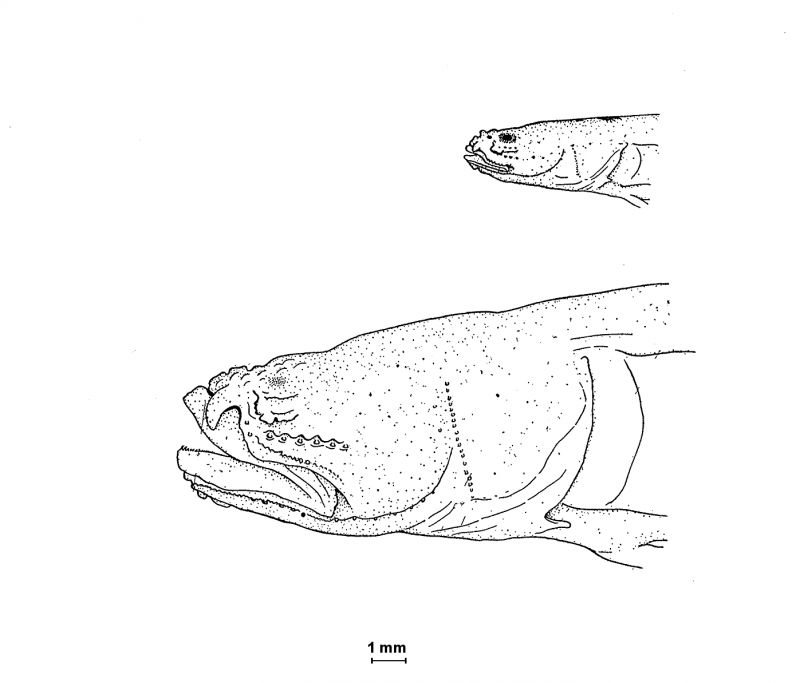 Juvenile (above) with eyes and adult (below) without. From Eigenmann 1926 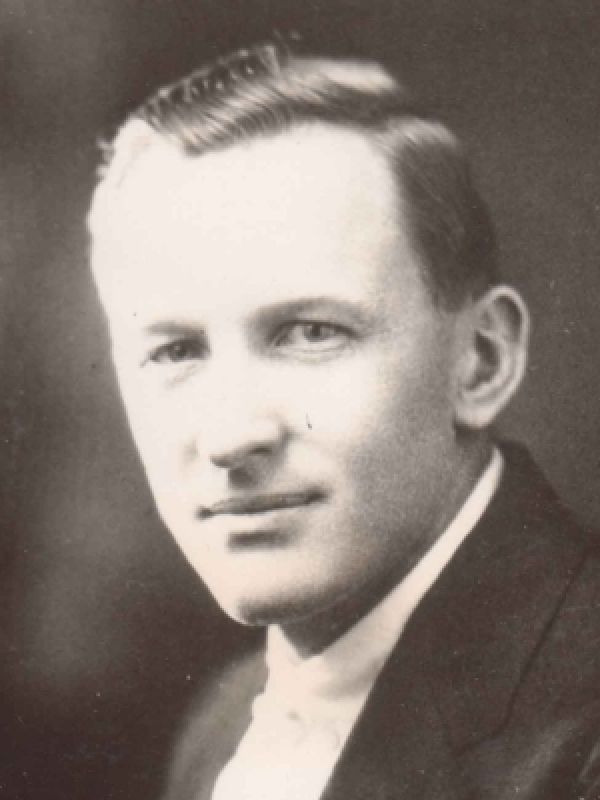 George E. MacGinitie, 4th May 1889-9th June 1989, who is, so far, the only person to have studied in detail the biology and life history of Typhlogobius californiensis