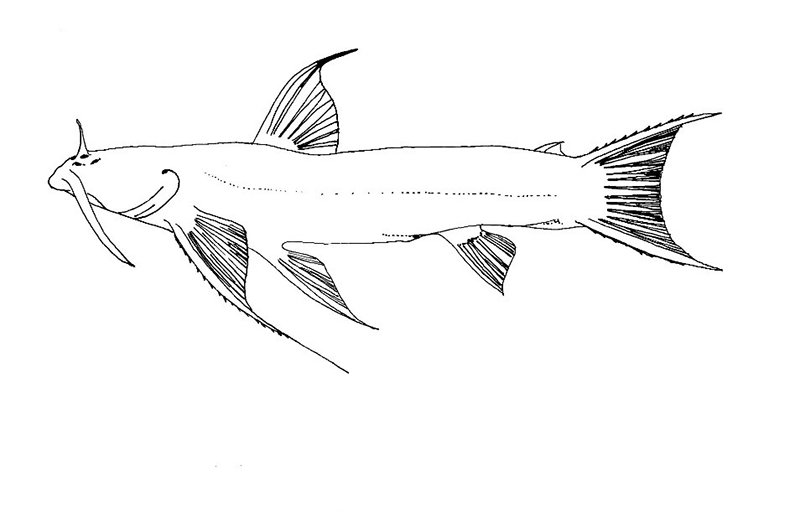 Redrawn by Rhian Kendall from Collette (1962)

It is possible that this species was first seen by Alexander Von Humboldt (1805) and described as Pimelodus cyclopum (Nico 2001) (See below and also Romero and Paulson 2001).

These caves are in the biogeographic unit Amazon and drainage basin Napo/Coca of Schaefer (2011:268-273).

Jumandi Cave consists of a vadose stream passage 800m in length with a further 400m of side passages. The stream rises from a sump, flows through the cave, falls over a waterfall 0.8m high, and resurges from the cave mouth. Water temperature is 15o‑ 20oC, pH neutral, and water medium hard. The other aquatic species to be commonly seen are a characin fish Creagrutus muleri, a prawn Machrobrachium brasiliense, and nymphs of a mayfly Euthyplocia. The last of these provide the bulk of the diet of A. pholeter (Brown 1981; Hanson 1981; Brown and Hanson 1981). Sket (1985) records the amphipod Bogidiella gammariformis.

Collette (1962:313) states that A. pholeter is very different from all other known species of Astroblepus. However, some of the differences he cites (reduced pigment and eyes and increased barbel length) are simply related to a cave‑dwelling existence (stygomorphic characters) and provide no help in elucidating the relationships of the species. In other characteristics (long filaments on dorsal and anal fins, long pelvic fins, and a barbel on the nasal flap) it superficially resembles A. longifilis. It differs from this species by possessing (at least in the type series) a distinct adipose spine and in lacking an adipose ridge between dorsal and caudal fins. The adipose spine, however, poses a question since none of the animals observed by Hanson (1981) possessed one. This difference is so far unexplained.

Chardon (1966, 1968:196‑201) studied the Weberian apparatus of many siluriform fishes. He concluded that various of the Weberian structures of A. pholeter are unique.

Espinasa et al. (2018) made a thorough study of the morphology of the species from collections and observations made in 1962 (the type series, see above), 2011, 2015 and 2018. Across this time period there was clear reduction in troglomorphic characters and a clear increase in characters exhibited by epigean Astroblepus species. They suggest that this is clear case of introgressive hybridization with epigean species of Astroblepus which have been observerd in the cave. If this continues it is likely that the hypogean species Astroblepus pholeter will eventually loose its status as a separate species.

The following account is taken from Nico (2001) biography of Humboldt:

10) cyclopum Pimolodus Humboldt 1805:21-25, plate 6. Family: Astroblepidae. Eschmeyer (1998) references Burgess (1989:443) in stating that the species is valid as Astroblepus cyclopus. The original description includes a drawing of the specimen with number of rays grven next to each fin. Humboldt notes that he sketched the fish, and the sketch was then colored by M. Turpin. Eigenmann and Eigenmann (1890:349-350) discuss the species in some detail. They state: "The poor description of P. cyclopum makes an absolute identification impossible." For a period of time, this species was placed in the genus Cyclopium Swainson 1839 (now considered a synonym of Astroblepus). Eigenmann (1918) described a new variety, A. c. santanderensis, based on specimens taken from an elevation of 1,000-2,000 meters in the Rio Suarez drainage, Colombia. The taxonomic status of the subspecies is unclear. Most of Eigenmann's material currently is housed at the Field Museum of Natural History, Chicago (FMNH). Henn (1928:82) designated a lectotype: FMNH 58433 (ex CM 7430). I have not been able to uncover additional information on Eigenmann's species. According toEschmeyer (1998), the type locality of Humboldt's catfish is subterranean waters in the Andes of Quito (basin of Rio Esmeraldas), Ecuador. In contrast, Eigenmann and Eigenman (1890:349-350) indicate that Humboldt's species is found in the Andes and the Amazon, but they make no mention that its habitat is subterranean waters. I have been unable to locate the Rio Esmeraldas on my maps, but a geographical dictionary indicates the river flows west from the Andes Mountains into the Pacific ocean. According to Humboldt's original text, his description apparently was based on one or more specimens collected in a surface stream in the vicinity of several active volcanoes. In his original description, Humboldt relates that locals, including some reliable sources, told him that large numbers of fish are periodically spewed from vents as well as from the summit of area volcanoes. Named volcanoes involved in the strange phenomena included Cotopaxi, Imbabura, Cargueirazo, and Tungurahua (see rnap of Papavero 1971). Reportedly, fish were either ejected together with cold water or embedded in clay materials, all were dead but in relatively good condition. Humboldt fully accepted the stories and concluded that his new species was the same fish spewed from the volcanoes, but he does not explain how he came to this determination. He does note that the new catfish is rather uncommon in surface waters. However, based on the numbers of fish periodically spewed from volcanoes, Humboldt believed it to be abundant in subterranean waters. In describing the catfish Humboldt notes that its eyes are small, but describes the fish as being olive color with small black spots (based on its somewhat dark pigmentation pattern, Humboldt's catfish is not a highly-evolved cave form). Interestingly, modern researchers apparently have overlooked Humboldt's unusual account of this possible subterranean species. For instance, the catfish is not included in an unpubtished list (dated 1997) of cavedwelling fishes of the world that was disbibuted during a symposium on the biology and evolution of cavefishes held at the 1998 annual meeting of the American Society of Ichthyologists and Herpetologists in Guelph, Canada. Collette (1962) described as new a cave-dwelling Astroblepus, A. pholeter, based on specimens taken from a large cave in Latas, 4 km north of Archidona, Napo Province, in eastern Ecuador. The species is described as essentially unpigmented and minute-eyed. Interestingly Collette makes no reference to Humboldt's cyclopum and states that his A. pholeter is the first known cavernicolous astroblepid. The oversight suggests the need to take another look at A. pholeter to determine if it is closely allied to A. cyclopus and to dismiss the possibility of it being a junior synonym. The type locality of A. photeter is less than 100 km southeast from Quito and falls within the Napo-Amazon rivers basin.

(Jimenez-Prado and Arguello 2016. Astroblepus pholeter. The IUCN Red List of Threatened Species 2016.http://dx.doi.org/10.2305/IUCN.UK.2016-1.RLTS.T49830520A64844937.en. Downloaded on 02 July 2017).The species has a restricted range and probably is affected by habitat modification produced by cropland, livestock, dams and urbanization. It therefore probably qualifies for classification in a threatened category under criterion B1b(iii). However, at present the lack of precise field data, largely concerning severity of population fragmentation and number of locations, impedes determination of the appropriate category (Endangered). It is therefore classified as Near Threatened.

As above plus: BMNH.