Redrawn by Rhian Kendall from Ginet and Decou (1977)

"In this second part of the cave the flow of is significantly increased and basins are formed where many small white fish live."

"Animal life is poorly developed in this cave; besides the bats and white fish…"

Various other dates for its discovery are in the literature:

The critical personality in the eventual description of the fish by Boulenger was Dr Henri Schouteden of the Musee Royal du Congo Belge, Tervuren (Belgium) (now the Musee Royal de l’Afrique Centrale) (Thys van den Audenaerde 1999). He cooperated with G. A. Boulenger of the British Museum (Natural History) for the description of new fish species that he and his associates collected in, what then was, the Bas Congo. Shouteden was in the Bas Congo between 1920 and 1922 and got to know G. Geerts who was managing director of the railway company that used the Matadi to Leopoldville railway. When Schouteden was in Thysville (now called Mbanza Ngungu) he met Geerts who mentioned that some of the local caves had blind fishes in them. So, some were collected and sent to Mrs Geerts in Belgium who gave them to Boulenger who had, by 1920, returned to his native Belgium. Although by this time he had ceased to work on fishes he did one final favour for Schouteden, and also for Geerts, in describing and naming this subterranean fish. So, in all probability, the fish was known about to some people as early as 1913 but it was the influence of the Museum collector Schouteden that finally it became formally described (Boulenger 1921).

The local name for this species is Nzonzi a mpofo.

Democratic Republic of the Congo

The description was based on a syntype series: MRAC 14.610 - 14.612 (3 specimens), BMNH no number (1 specimen). This species is the type species by monotypy of the cave restricted genus Caecobarbus.

The above described distribution is the historical known distribution known about since the fish was first discovered. Recent explorations in the Nkyende Area, 50km south of the historical range, has found several new populations of fishes which are similar to C. geertsii. However they differ in various morphological features and have a genetic distance of 1.4%-2.1% (COI, mtDNA) from the other populations. It is likely that these new popualations with be described as one ot more new species within the genus Caecobarbus, or possible in the genus Enteromius (see below) (information from Decru et al. 2018).

The area of distribution is a continuous karst area but there do not appear to be connections between the seven known sites. All are vadose stream caves which carry small streams in summer but flood in winter.

Vervoort (1980) found a chromosome complement of 2n=50 with more than 80 chromosome arms. This arrangement is common among cyprinid fishes. This, together with the absence of karyotypes for other African cyprinid species, does not allow any conclusions about relationships to be made with this method. Howes (1991) placed this species (together with Barbopsis devecchii and Garra andruzzii) in the barbin lineage of the subfamily Cyprininae. Hayes and Armbruster (2017) studied the taxonomy and relationships of the Africa small barbs, a group to which C. geertsii belongs (with Barbopsis devecchii) but a complete absence of tissue samples for these two subterranean species meant that they were excluded from the analysis. Heuts and Leleup (1954:52-54) note that the fishes in one cave, Grotte B16, have a small pigment patch on the operculum which is absent in all other populations. This may indicate that the B16 population is diverging, or divergent, from other populations (see photograph below). In a thorough phylogenetic classification of the Cypriniformes Tan and Armbruster (2018) placed Caecobarbus as incertae sedis within Cyprinidae as they were unable to determine the subfamily into which to place it.

Mullens et al. (2020) (and see also Decru et al. 2018) determined the mitochondrial genome of this species. This made it possible to determine that it is probably sister species to a species in the genus Enteromius. Nine species of Enteromius cluster in the same clade and it is therefore possible that the genus name Caecobarbus Boulenger 1921 will need to become a junior synonym of Enteromius Cope 1867. Mullens et al. (2020) refrain from making this decision in their paper, commenting that a fuller study might show that subclades of the current Enteromius may exist and that as Caecobarbus is the next oldest generic name it may be required for one of the subclades. The same study showed conclusively that Caecobarbus is a member of the subfamily Smiliogastrinae.

The most important publications on the distribution and biology of Caecobarbus geertsii are Heuts (1951), Heuts and Leleup (1954) and Kimbembi (2018). When reading Heuts (1951) it is also important to read Breder (1953) for an alternative explanation of aspects of the biology of the fish.

Sedimentation flowing into the caves poses the main threat to Caecobarbus geertsii. At least one cave is known to be used as a quarry. The species is known from more than five but fewer than 10 locations. The EOO and AOO are estimated to be far less than the criteria for the Vulnerable status, but the estimated number of locations restrict the assessment possibilities for this species to the Vulnerable status (Moelants 2010. Caecobarbus geertsii. The IUCN Red List of Threatened Species 2010: http://dx.doi.org/10.2305/IUCN.UK.2010-3.RLTS.T3449A9866689.en. Downloaded on 03 July 2017).

This was the first African fish to receive some statutory protection when it was placed on a list of protected animals of the (then) Belgian Congo (together with the more prominent Gorilla and Chimpanzee) (Frechkop 1941). Skelton, Tweddle and Jackson (1991:230) report that this species is collected for the aquarium trade because of its novelty. This species was listed in CITES Appendix II in 1981 (CITES 1981) to protect it from this trade. This means that an export permit is required before animals can be removed from Democratic Republic of Congo. In 1993 1500 wild caught individuals were imported into the USA, 30, source unknown, to Japan in 1994 and 6, captive-bred, to Italy in 1996 (John Caldwell, WCMC, pers. comm.). See also Proudlove and Romero (2001).

This species is found in Ecoregion 80 (Thysville Caves) of Thieme et al. (2005). This is an area of subterranean and spring systems which is globally outstanding faunistically, with a conservation status of endangered and a priority class of 1 (Reid 2005). Brooks et al. (2011) place this species in Ecoregion Lower Congo who say of it: "The Mbanzagungu (Thysville) caves which were originally classified as their own ecoregion by Thieme et al. (2005) are considered here within the Lower Congo region. These numerous limetsone caves and subterranean conduits are home to an endemic hypogean species, Caecobarbus geertsii, classified as Vulnerable. A significant threat is from sedimentation of waters in the caves, caused by surrounding agricultural development (Thieme et al. 2008). Other threats include domestic and agricultural pollution, changes in hydrology, and habitat destruction. There is increasing human population in the region and accompanying agricultural development, and the caves are also a growing tourist destination."

Decru et al. (2018) document that the total population of Caecobarbus in the original, northern, area was of the order of 8000 but that as of 2018 65-75% of them had been lost to various external issues such as mining, quarrying etc. 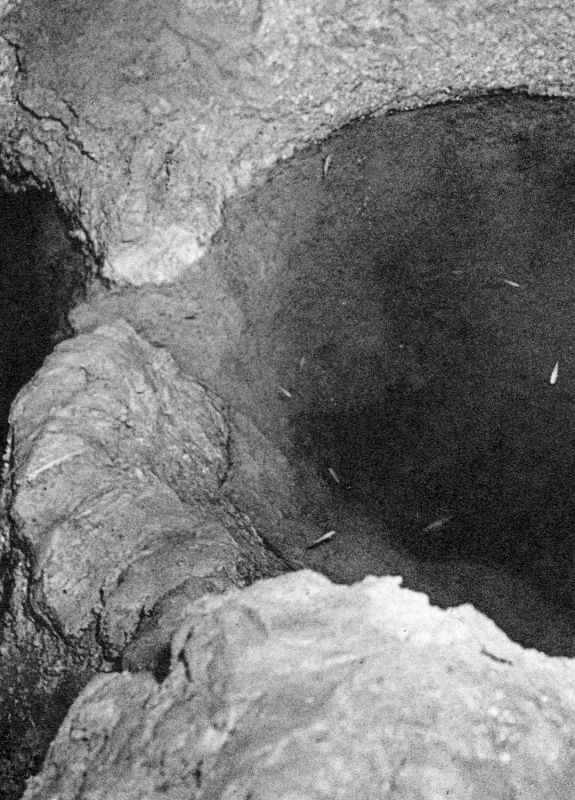 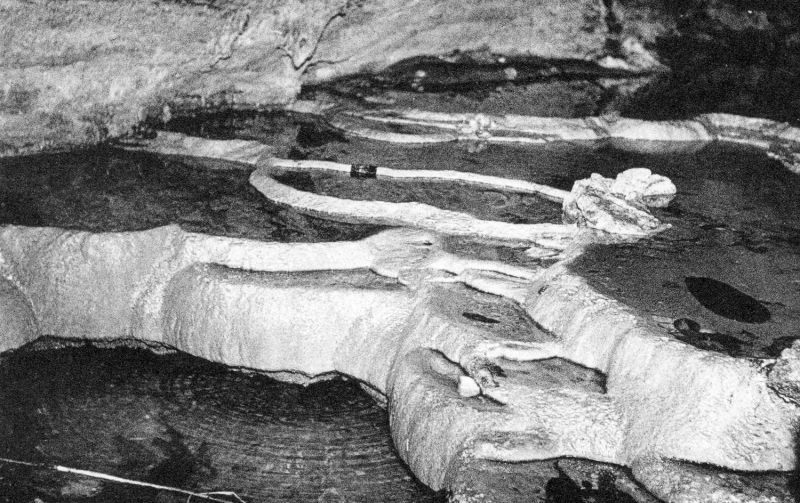 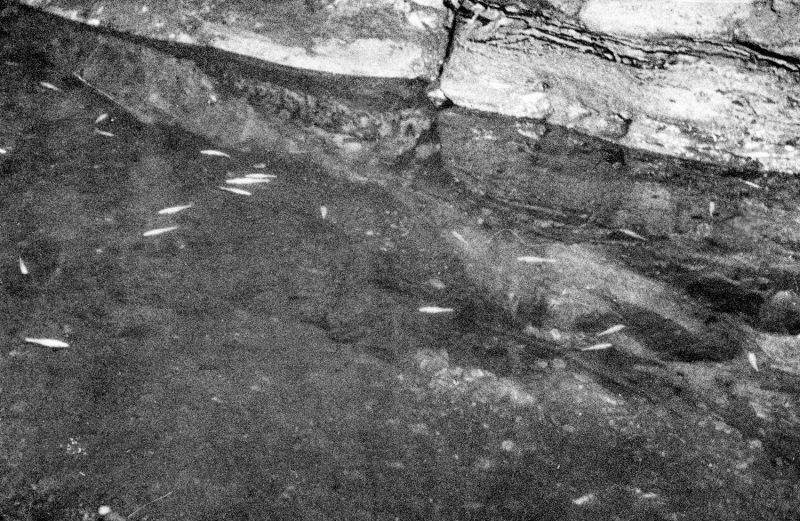 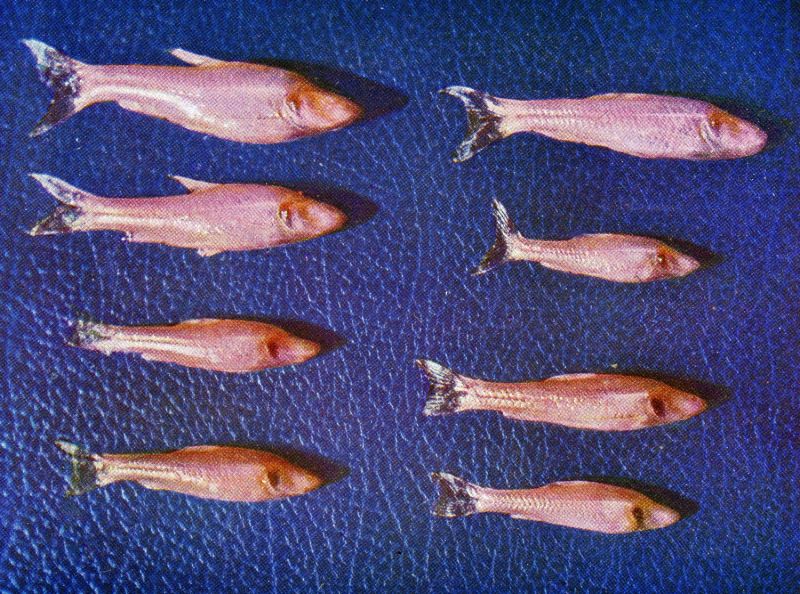