Redrawn by Rod Holt from Banister and Clarke 1977

Garra longipinnis was described in 1977 from epigean specimens from Jabal al Akhdar, Oman (Banister and Clarke 1977). In May 1980 A. Dunsire and M. Gallagher discovered and collected specimens of an eyeless and depigmented fish from a cave in Oman. Banister (1984) provided a brief account of these fishes (under the name Garra barreimiae), and others collected later. The cave morph is now known to be G. longipinnis and the following details apply only to the cave-dwelling members of the species.

Khalaf-Sakerfalke von Jaffa (2009) provided an account of a blind cave fish from Wadi Al Wurayah, Emirate of Fujairah, UAE, which he called Garra barreimiae wurayahi Khalaf 2009.  Eschmeyer, Fricke, and van der Laan (2018) comment: "Name apparently not available from this description, as no types designated (ICZN Art. 16.4) and no differentiating diagnosis or description given (ICZN Art. 13.1.1). Name needs subsequent validation". It seems unlikley that this is a real subterranean fish.

When a troglomorphic subterranean population of fishes was found in Al-Hoota Cave (Bannister 1984) it was thought to be conspecific with Garra barreimiae Fowler and Steinitz 1956 and has been referred to this species since then. Recent genetic studies (Kirchner et al. 2020, Kirchner et al. 2020, summarised in Freyhof et al. 2020:163-167) have shown that the two cave populations are actually Garra longipinnis and not G. barreimiae.

Of the cave-dwelling form:

Banister (1984) records that the fishes he examined were obtained from a cave on the southern flank of the Jabal Akhdar mountains, 9km ESE of Al Hamra, Oman (23o05'N, 57o21'E). This location corresponds exactly with Kahf Hoti (also known as Al Hoota Cave), the most extensive cave in the Jabal Akhdar. Details of the cave, with survey, are provided by Waltham, Brown and Middleton (1985) who comment that large numbers of fishes were present in lakes in the cave. Banister (1984) reports that other subterranean populations of Garra species have been discovered in Oman but he discloses neither the location nor the identity of these fishes. This species is also found in a closely related cave the Hoti Pit (Kirchner et al. 2017).

The fishes live in a number of large deep lakes within the cave. The main population is in Fish Lake which receives input from a mineral rich inlet of warm water. The cave carries flood water perhaps twice a year and this presumably brings in food from outside. The fishes can migrate upstream (Figs. 1-4 below) but what initiates this migration is not known.

Wilkens (pers. comm.) has successfully cross-bred the cave and surface G. longipinns, which, under the Biological Species Concept, suggests that they are a single taxon. However, there are bound to be major differences in ecology and competitive abilities between the epigean and hypogean morphotypes (see discussion under Astyanax jordani)and their conspecificity should not be assumed as solid without further, probably DNA, studies. G. longipinnis is a member of the monophyletic group termed labeine cyprinids by Reid (1978, 1982). Two other cave dwelling species, Garra widdowsoni and Garra typhlops are also members of this group. See also Howes (1991) who places this lineage in the subfamily Cyprininae.

R (IUCN, 1990), R (IUCN, 1993), VU D2 (IUCN, 1996, 2000). There are now captive populations at (at least) Chester Zoo (Graham Proudlove pers. obs.) and Bristol Zoo (Chris Smart, pers. comm.), UK, and at the Zoologisches Institut und Museum in Hamburg, Germany (Jacob Parzefall pers. comm.). The Chester Zoo population bred in July 1991 (Banister, Bell and Crumpler 1992). Waltham, Brown and Middleton (1985) studied the area around the Hoti cave extensively and concluded that it is unique in that area. There may therefore be no other suitable habitats for cave fishes for many kilometres and the population in Khaf Hoti may very well be the only one.

There must be preserved specimens at Chester and Bristol zoos in the UK and at the Zoologisches Institut und Museum in Hamburg. 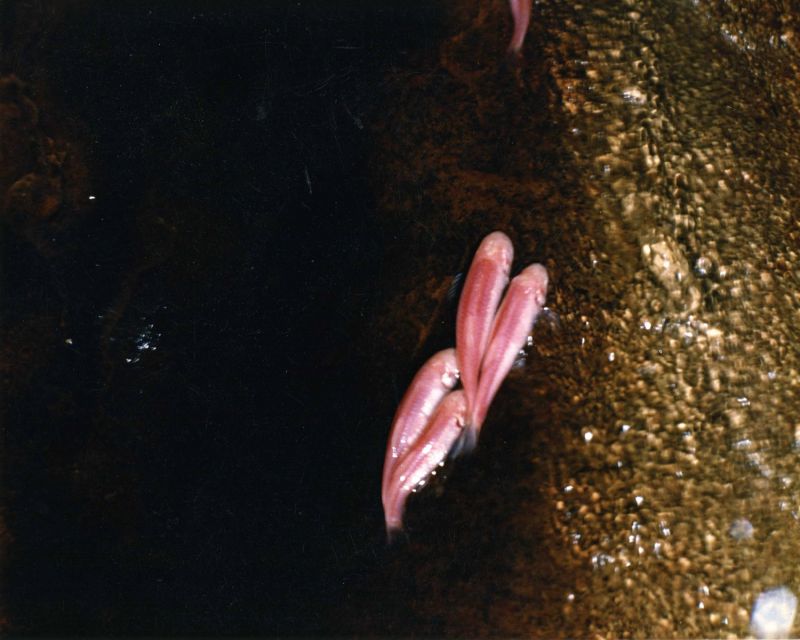 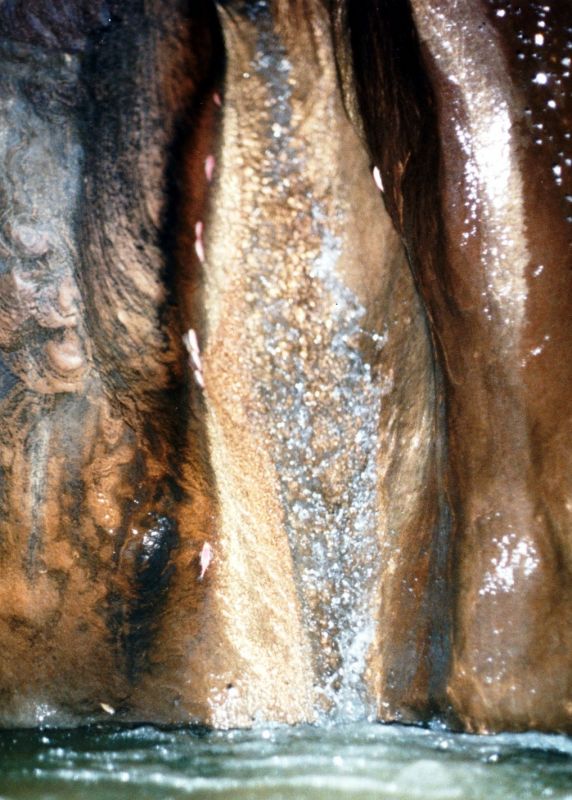 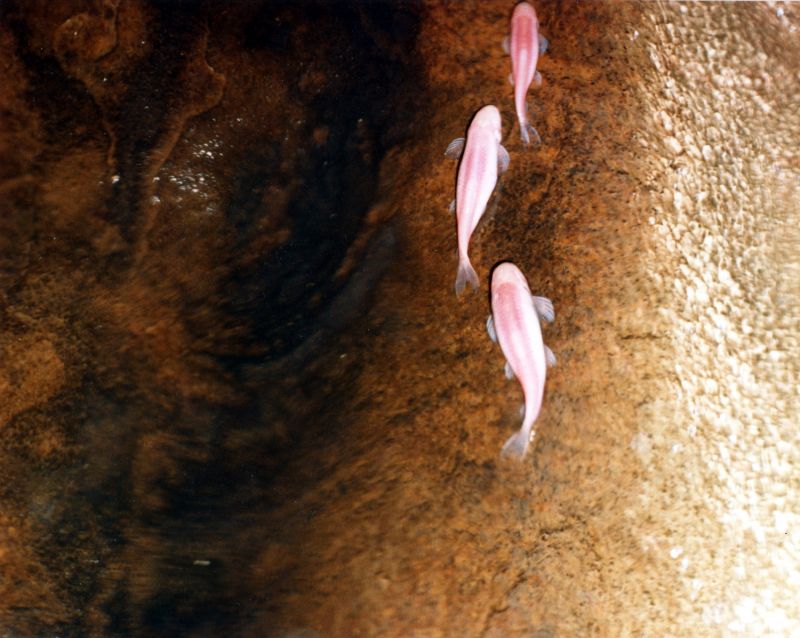 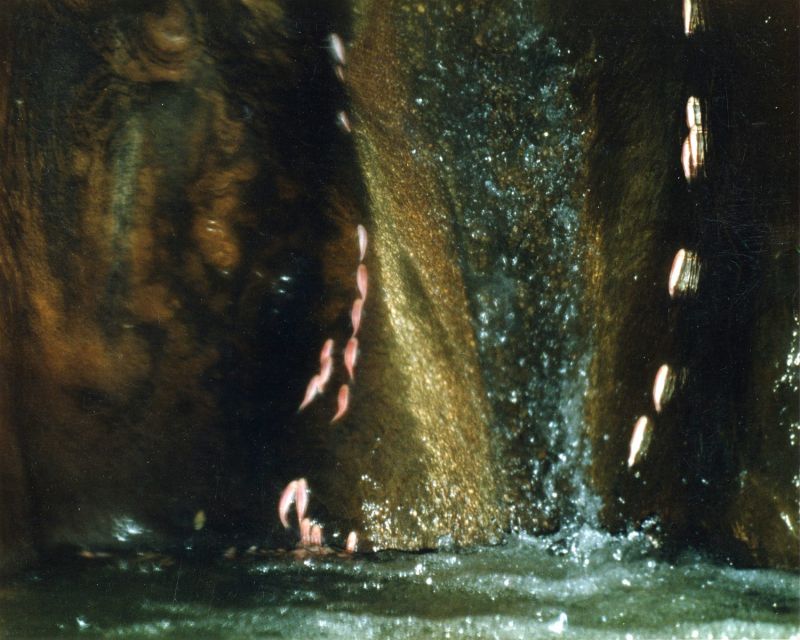 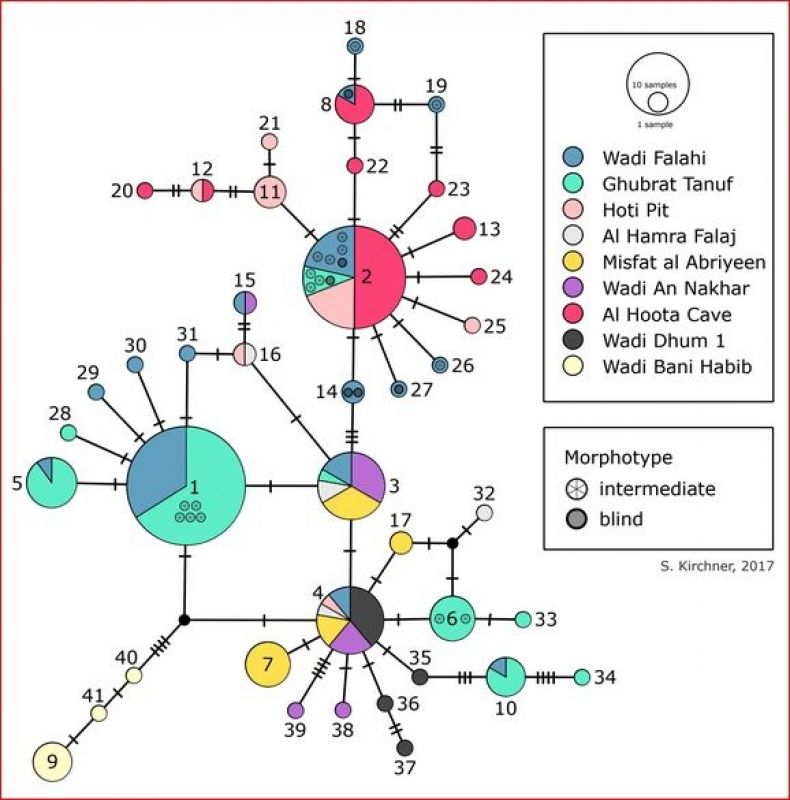 Fig. 5. From Kirchner et al. (2017). Used under a Creative Commons 4 license and with permission of Sandra Kirchner. 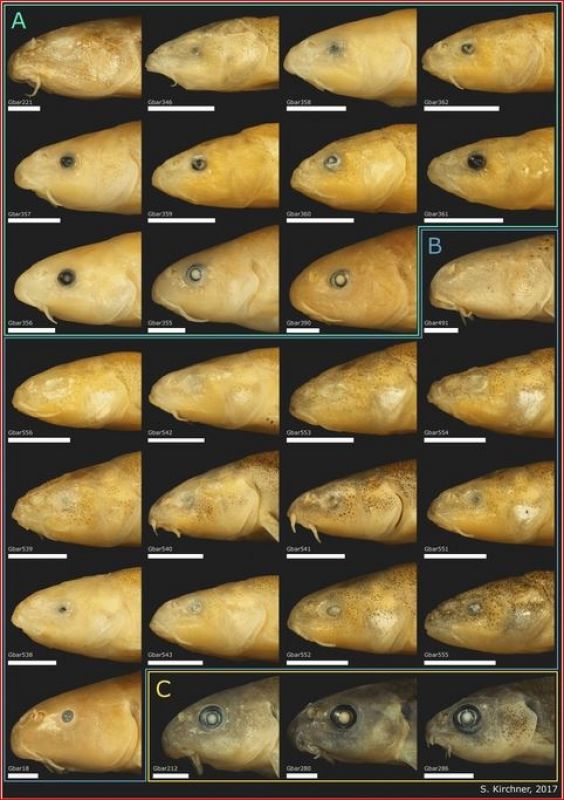 Fig. 7. Depiction of varying eye development in intermediate and surface morphotypes. Intermediate/blind individuals from A) Ghubrat Tanuf, B. Wadi Falahi, C) typical surface morphotype. From Kirchner et al. (2017). Used under a Creative Commons 4 license and with permission of Sandra Kirchner.