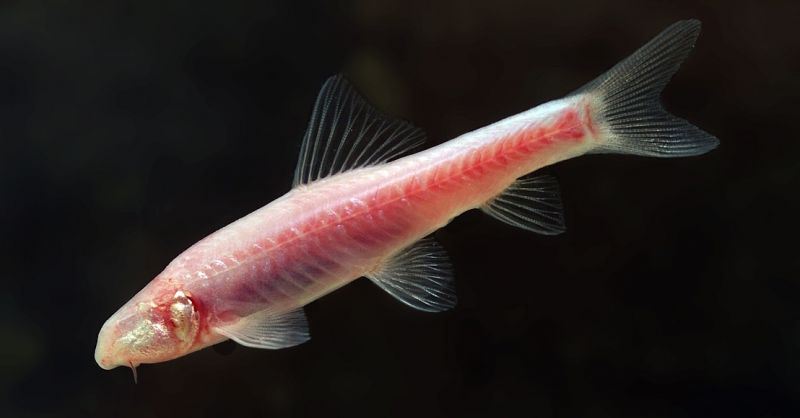 Also known from: Haqlaniya valley sinkhole (N 34° 5’28.32” E 42°21’56.30”). Locals people reported that there had been once seven additional places but the exacty location these is not known.

Above information from Al-Sheikhly and Freyhof (2013).

The only other known collection site is the Pigeon Hole, 12 km south of the type locality. A cave dwelling fish was collected from this site around 1950 (Widdowson 1954) but was lost and not identified. A specimen in the BMNH (BMNH 1960.3.1:31) is recorded from this site thus confirming the presence of the species.

The two sites in Haditha are also the type locality of Caecocypris basimi and the two species coexist.

In a study of intra-populational variation Niazi (1965) was only able to obtain specimens from the type locality.

Nothing known. The collection locality is simply a small window into the local phreas.

Post (1965) reported that the haploid chromosome number (n) for this species is 24. This appears to be the plesiomorphic state for many teleosts. Niazi (1965) examined 69 specimens (juvenile to adult, 12.0mm - 47.5mm SL) and showed that there is a degree of intra-populational variation within the species. This species belongs to a monophyletic group termed 'labeine cyprinids' by Reid (1978, 1982), where it is joined by other cave-dwelling species, (Garra longipinnis, Garra typhlops, Garra anduzzii, Garra dunsirei, Garra lorestanensis and Garra tashanensis)  Howes (1991) accepts this placement, calling it the labeine lineage which is member of the subfamily Cyprininae.

Al-Sheikhly and Freyhof (2013) conducted a survey of the Haditha sites in 2012, the first comprehensive survey for 30 years. They found that the Haqlaniya valley sinkhole was dry with no fishes to be found. Only the Sheik Hadid Shrine sinkhole was with water and even this was severely impacted by water-level reduction. Only Garra widdowsoni was seen and there have been no sitings of Caecocycpris basimi for several years. Both species certainly merit CR and C. basimi may well be EX.