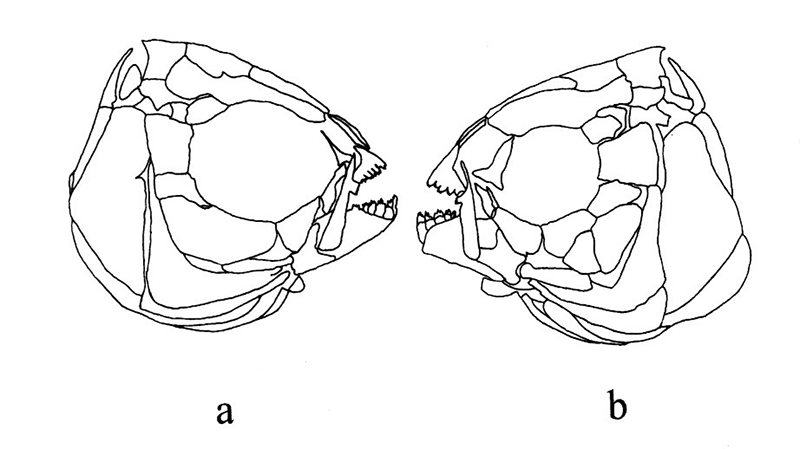 The skull of epigean (a) and troglomoprphic (b) Astyanax aeneus (from Espinasa et al. 2001)

Espinasa, Rivas-Manzana and Espinosa Perez (2001) describe a stygobitic, hypogean population from Mexico and the following details relate only to the hypogean animals.

This species has not yet been described as new so there are no types. The best current description is in Espinasa, Rivas-Manzana and Espinosa Perez (2001).

“Type locality” of the hypogean animals: Gruta de las Granadas, north-east of Taxco, Guerrero, southern México (18o34’30”N, 99o33’7”W). The stream flowing from the cave is a tributary of the Amacuzac River. Known also from Resumidero La Joya in the same area (Espinasa 2018).

The collection site is a cave passage 180m long to a sump pool. The cave is a resurgence and water flows out of it all year round. Within the cave there is a mixed population of the stygomorphic, presumably stygobitic, animals and ordinary surface animals. Only about 10% of the population are stygomorphic. This suggests that their true habitat is undiscovered and lies further into the cave.

From the few data available it appears that the stygomorphic animal is a separate taxon from the epigean animals and that it is currently hybridising at the collection site. This situation is analogous to that of Astyanax jordani in La Cueva Chica (Breder 1942) and perhaps Poecilia mexicana and Rhamdia urichi at their only known sites. Should this turn out to be the case a new name would be appropriate to differentiate the taxon.

The hypogean population of this species is currently known from only two sites and is therefore VU D2 at least. 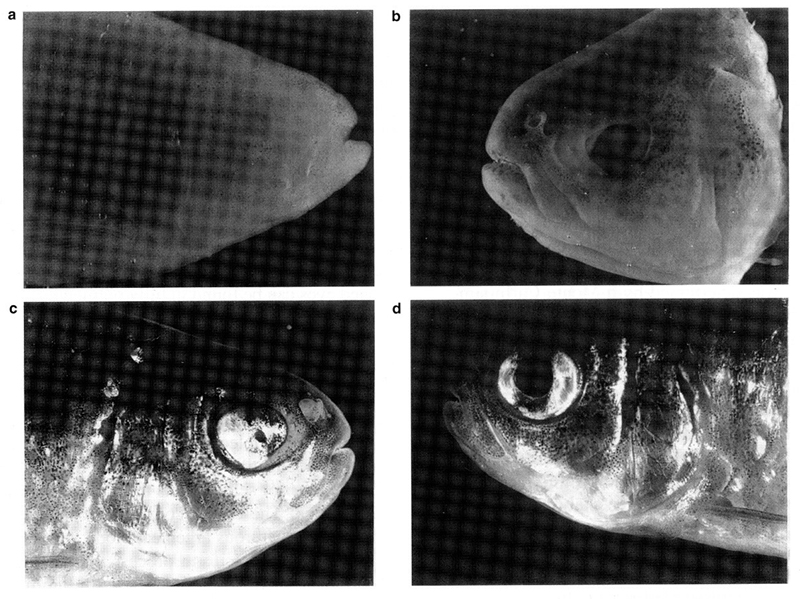 Levels of eye development in the Granadas cave population: a – eyeless, b – sunken eye, c – reduced pupil, d – eyed. Pictures c and d are of the same animal and show asymmetrical development. From Espinasa et al. (2001)