Redrawn by Rhian Kendall from Trewavas (1936)

The first specimens were obtained by Karl Jordan in 1933 and reported back, by letter1, to Jordan’s employer, Walter Rothschild. The following paragraph is by Kristin Johnson regarding this letter:

Their most interesting find was a semi-transparent pinkish Silurid, 6 inches long with a minute eye, which they had found in a cave 250 feet below the surface of the soil. “It was quite an undertaking to get to the crevice which gave access to the water,” he reported, “that had receded out of sight; we were 7 Europeans and 3 blacks, and with the help of ropes and ladders we got what I wanted.” (Jordan 1933). Details from Kristin Johnson pers. comm. July 2020.

"Perhaps Rothschild recognized the debt he owed, however, for in the winter of 1933 he allowed Jordan to go on his first collecting trip outside Europe to collect lepidoptera and fleas in Southwest Africa. Jordan was seventy-two years old.” (Johnson 2004:293, Johnson 2012:234).

The date of 1933 is also mentioned in Jordan's own Commentary:

"I was reminded of this queer optimism when I gazed early in October 1933 for the first time on Walfish Bay and its hinterland." (Jordan 1936:17).

Bert and Messana (2010), in their review of African subterranean fishes, give the right year, 1933.

However, there are other sources in the literature which give the wrong year for the expedition and the wrong age for Jordan when he carried it out.

"...at the age of seventy-four a major and very successful expedition of seven months’ duration to South-West Africa and Angola." (Rothschild 1955:7).

"At the age of seventy-four, Jordan made his first really ambitious collecting expedition, to South West Africa" (Riley 1959). This is probably a direct copy from Rothschilds biography. See also Riley (1960).

These types were assigned by Teugels (1986:134‑137) and are taken from the syntype series of Trewavas (1936). Trewavas records that the species was described from six animals but this is a mistake. The BMNH collection contains only five type specimens (G. S. Proudlove personal observation) and they are the ones used by Teugels.

Known only from the type locality: Aigamas (or Aigumas) Cave, north of Otavi, west of Grootfontein, Namibia (19o26’30”S, 17o17’26”E). A very large lake in Dragons Breath Cave in the same area has been examined by divers but no sign of this species was seen (Maxwell 1988; Irish 1992). There is a film available on the internet which suggests that this species is known from Dragons Breath Cave but this is erroneous and should be diregarded (Gerald Favre and Alessio Fileccia pers. comm.). Despite this error it is worth watching the film for the last few moments as the fishes are beautifully portrayed. See below for surveys of Aigamas Cave, in plan and in section, with cave fishes shown in their usual place in the cave. If you click on the surveys below they will be enlarged.

The pool is in total darkness and is 18m by 2.5m in area, its depth is 30-52m although the fishes appear to live over shelves in shallow water up to 15m in depth (Jacobs et al. 2019, 2019, 2020). The water temperature is 27oC. The food supply consists of insects associated with bat and baboon guano and insects from carcases of dead animals (Skelton 1990a,1990b,1990c; Bruton 1995). The cave is inhabited by a large colony of the bat Hipposideros commersoni (Churchill, Draper and Marais 1997). The lake is also home to an endemic troglomorphic Isopod Namibianira aigamasensis Kensley 1995. The cave is described in detail by Sefton et al. (1986).

Trewavas (1936) suggested that the species was related to Clarias alluaudi Boulenger 1906, C. submarginatus Peters 1882, and C. dumerilii Steindachner 1866. After a very thorough study of all of the African species in the genus Teugels (1986) placed C. cavernicola in the subgenus Anguilloclarias together with the first two species named above. Also related to C. cavernicola are C. theodorae Weber, 1897 and C. nigromarmoratus Poll, 1967. The former of these two is particularly interesting as its range, in the Cunene and Okavango drainage basins, is adjacent to the Aigamas Cave, the home of C. cavernicola. C. dumerilii is not closely related as it differs in several important subgeneric characters.

Diogo et al. (2003), also de Pinna (1993) and de Pinna (1998), have suggested, on morphological grounds, that the most basal member of the Family Clariidae is Horaglanis, and that the next most basal is Uegitglanis.

Jacobs et al. (2019, 2019, 2020), with cave-diving colleagues, carried out two surveys of the lake in Aigamas cave to determine the nature of the fish population and its habitat. These were part of a baseline study of the critically endangered fish at its only know site. A visual census in February 2019 revealed that there were around 115 fishes in the lake and that the great majority were living in the upper 3m of water (the lake is at least 40m deep). A second census in May 2019 counted only about 40 individuals. During the February studies 10 animals were measured and the mean total length was 104mm (range 42mm-153mm). The difference in numbers sighted in February and May strongly suggests that the fishes have some migratory behaviour. This idea received some support by the fact that during these studies two further pools containing fishes were found in a close by cave formed on the same fault as Aigamas Cave. Thought not proven it is very likely that the two caves are part of the same hydrological system and the fishes seen in the original pool, and the new ones, are the same population. The new pools contained about 60 and 13 fishes respectively.

The lake in Aigamas Cave has been used as a water supply in an otherwise very dry area. Pumping of water has reduced the depth of the lake from 70m to 50m since 1921 (Skelton 1990a,1990b,1990c, Bruton 1995). The animals appear to congregate above an underwater shelf  where they presumably obtain food from the bat colonies above them. This shelf is in danger of being exposed by the reducing water level. It is probably safe to say that this is one of the most endangered fishes in the world. During a dive in the lake in Aigamas Cave divers reported seeing hundreds of individuals (Speleofilms, Le Souffle du Dragon, Gerald Favre, no date). A population survey in 2019 recorded a maximum of 119 individual fishes (Jacobs et al. 2019).

This species is found in Ecoregion 79 (Karstveld Sink Holes) of Thieme et al. (2005). This is an area of subterranean and spring systems which is regionally outstanding faunistically, with a conservation status of endangered and a priority class of 4 (Skelton 2005).

Trewavas (1936) records that there were 12 specimens in addition to the type series but the BMNH collection contains only ten specimens from that period:

Note: Some marvellous film of this animal can be seen in the Speleofilm’s film: Le Souffle du Dragon (Speleofilms, Gerald Favre). 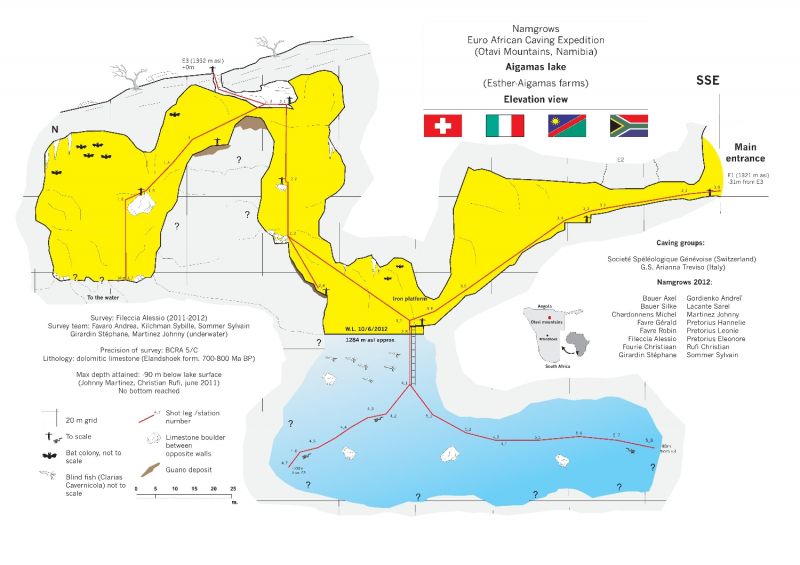 Aigamas Cave in section. Survey drawn by Alessio Fileccia and used with permission 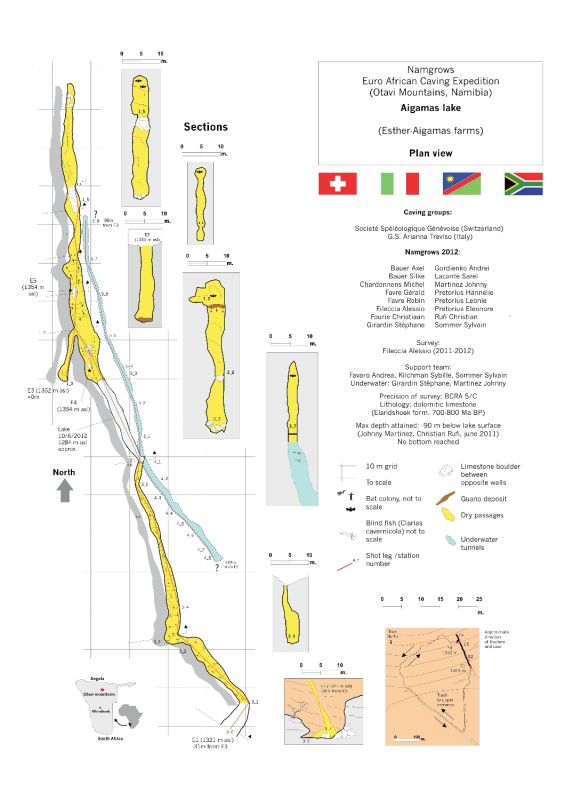 Aigamas cave in plan. Survey drawn by Alessio Fileccia and used with permission.