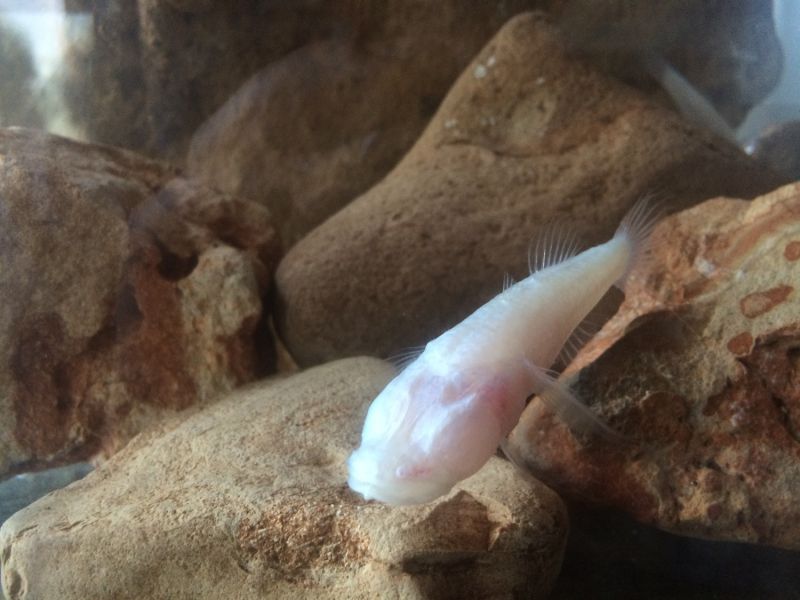 Photo of Milyeringa veritas by David Morgan and used with permission

Holotype: WAM P.2913-001, 40.5mm SL. This species is the type species by original designation and monotypy of the cave restricted genus Milyeringa, and the genus is the type genus of the family Milyeringidae.

Type locality: Milyering Well (=C-24), near Yardie Creek Station, North West Cape, Western Australia (22o01’S, 113o56’E). Details of all other known locations are given in Humphreys (1999) and summarised below. One further site is given in Page et al. (2018). At ten locations within Cape Range this species has been seen at sites from which Ophisternon candidum has also been recorded (Humphreys and Adams 1991, Adams and Humphreys 1993, Humphreys 1993, Knott 1993). The range of Ophisternon candidum has recently been extended to the east of the Pilbara region, but to date M. veritas has not been found in this area (Moore et al. 2018).

Various stygobitic Crustacea are found in Cape Range, eastern Pilbara and Barrow Island and their biogeography can help to inform us about the distribution and ages of the fish taxa there. The following sources are useful in this regard:

Humphreys (1993) Stygofauna and a Tethyan connection

Found in both freshwater and anchialine systems from close to the coast up to 4.3 km inland. Seen at karst windows and a depths of up to 33m. Collected from boreholes very remote from any opening to the surface (details from Humphreys 2001). The food of this species (and of Ophisternon candidum) was examined by Humphreys and Feinberg (1995). They found that 79% of the intake was terrestrial fauna in the form of Isopoda, Trichoptera, Hymenoptera and cockroaches. Only 10% maximum intake was from consumption of other cave animals.

Whitley (1945) erected the family Milyeringidae to contain this species because it differed from the Eleotridae by having no eyes and reduced ventral and dorsal fins. Subsequent authors (e.g. Greenwood Rosen, Weizman and Myers 1966, Nelson 1994) have not recognised this family and have placed the species in the Eleotridae. Hoese and Gill (1993) made a thorough study of eleotridid fishes within the family Gobiidae and placed the genus Milyeringa in the subfamily Butinae together with the genus Typhleotris.

Larson and Foster, in Larson, Foster Humphreys and (Stevens 2013), descibed a second species in the genus, Milyeringa justitia, from Barrow Island, offshore from the Western Cape.

Larson et al. (2013) synonymised M brooksi with M. veritas but there is a clear genetic and geographic difference between the two (their Figure 3) with the brooksi clade, concentrated at sites in south west cape Range, sister to the veritas clade, concentrated at sites in north west and east Cape Range, with an overlap only at C-25, Kudumurra Well. A comprehensive molecular analysis by Page et al. (2018), with data from M. veritas, M. brooksi, M. justitia, Typhleotris madagascariensis, T. pauliani and T. mararybe, supported the erection of a new species for jusitia and the synonymisation of brooksi with veritas. However, their data still show a clear sister relationship between the latter two taxa.

Their data also strongly support the placement of both Milyeringa and Typhleotris in the Family Milyeringidae as suggested by Chakrabarty et al. (2012) and Sparks and Chakrabarty (2012).

Kuang et al. (2018) used molecular markers to study the internal structure of the Suborder Gobioidei which contains within it eleven Families. They demonstrated that Milyeringidae is sister Family to a group of four  Families: Oxudercidae+Gobiidae+Butidae+ Eleotridae and is only disttantly related to four others: Odontobutidae, Rhyacichthyidae, Apogonidae and Kurtidae (samples from Thalasseleotridae and Trichonotidae were not availabe for analysis).

R (IUCN 1994), DD (IUCN 1996, 2000). Rare (Michaelis 1985). Humphreys and Adams (1991) document an incursion of saline water into the freshwater aquifer which, if real and continuous, will represent a dangerous threat to this and other stygobitic species in the coastal fringe of the Cape Range. This fringe is outside of the Cape Range National Park and therefore does not get the protection offered to sites within it.

From the pont of view of conservation the principle of precaution should hold and if this is done in this case the clade brooksi should be considered, at minimum, as an evolutionary significan unit (ESU) and not sunk entirely into the veritas clade ss.

The conservation of karst sites, and their fauna, in western Autralia is considered in a very detailed report by the Environmental Protection Authority (2012).