Keith (1988, 1989) surveyed caves and springs in Indiana. He found populations in 45 sites in Indiana. Eleven of the 45 sites in Indiana recorded by Keith were springs (i.e. resurgences) which suggests that this species may exist also in the phreatic zone. Welch and Keith (1974) surveyed caves in the Hoosier natinal Fprest. A study of the ecology of Amblyopsis hoosieri (as A. spelaea) in Blue Spring Cave, Indiana was conducted by Welch (1972). [Romero ansd Bennis (1998) noted that "this species is known from about 1800 caves in Indiana”. This figure is clearly in error].

Inhabits cool (8-17oC) hypogean streams which have mixed mud/rock substrates in shoals, and mixed sand/silt substrates in pools (Burr and Warren 1986:219). Eleven of the 45 sites in Indiana recorded by Keith (1988, 1989) were springs (i.e. resurgences) which suggests that this species may exist also in the phreatic zone. A study of the ecology of A. hoosieri (as A. spelaea) in Blue Spring Cave, Indiana was conducted by Welch (1972).

There are nine known and named taxa in the Family Amblyopsidae. Of these six are subterranean fishes with the usual troglomorphic characters of reduced eyes and pigment and permanent subterranean existence, and three are epigean fishes with normal eyes and pigment. Recent molecular and morphological evidence produced by Hart et al. (2020) demonstrates that the relationship between these hypogean and epigean fishes is not simple. There are four major clades within the Family:

2. Two of the epigean fishes, Forbesichthys papilliferus and Forbesichthys agassizii, are sister to each other and their sister is the hypogean species Amblyopsis spelaea.

The two remaining clades contain one species each but their relationships to the other six species is ambiguous:

3a. Sister to the above groups is epigean Chologaster cornuta with hypogean Troglichthys rosae sister to all other taxa.

3b. Sister to the above groups is hypogean Troglichthys rosae with epigean Chologaster cornuta sister to all other taxa.

Given the fact that the distribution of Chologaster cornuta is very far from the distributions of the other taxa 3b seems the most parsimonious explanation. Amblyopsis hoosieri is not included in the paper of Hart et al. (in press) but one would expect it to be in group 2 above based on geography.

This analysis does not take into account the ten possible cryptic taxa, currently subsumed within Typhlichthys subterraneus, identified by Graening, Fenolio and Slay (2011), Niemiller et al. (2013) and Hart, Burress and Armbruster (2016). 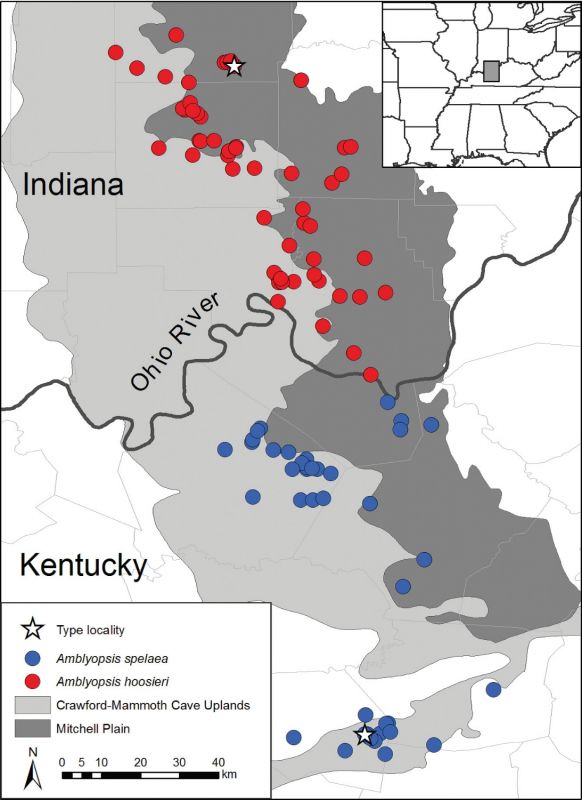 Distribution of Amblyopsis spp., Amblyopsis spelaea and A. hoosieri, in the Mitchell Plain and Crawford-Mammoth Uplands of Indiana and Kentucky. From Chakrabarty, Prejean and Niemiller (2014). With permission 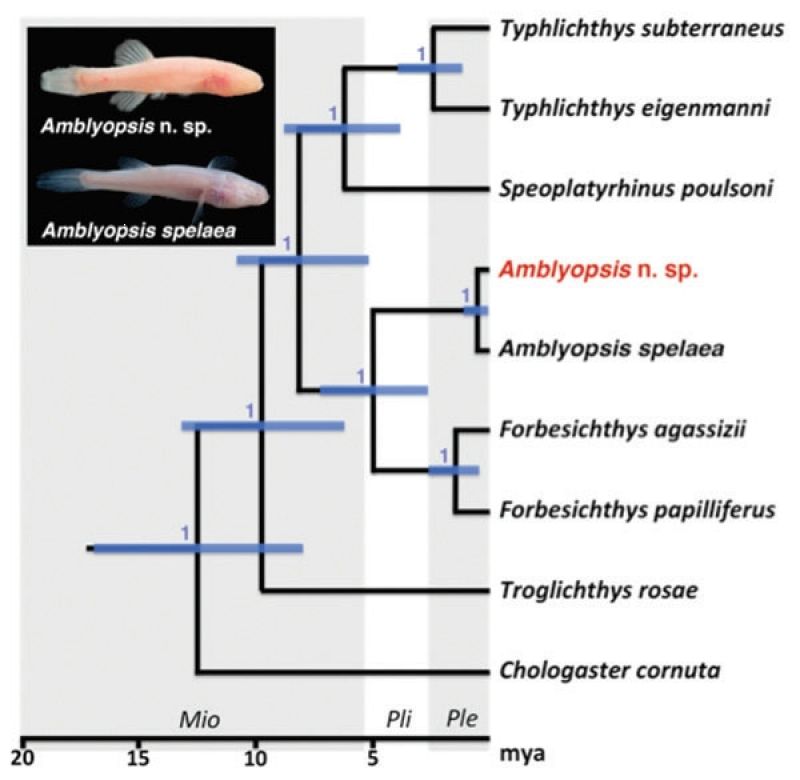 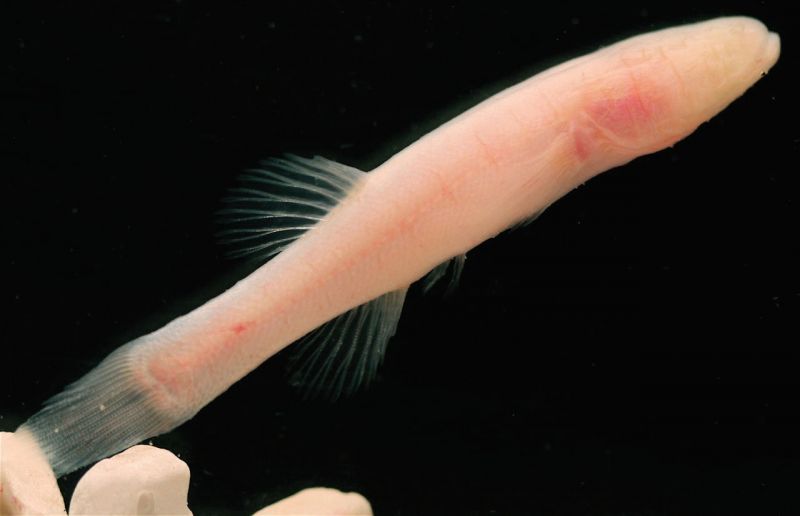 Photograph of a paratype of Amblyopsis hoosieri in life, YPM ICH 25304, 60.7 mm SL. Photograph by M.L. Niemiller. From Chakrabarty, Prejean and Niemiller (2014). With permission